Willem de Mérode (1887-1939) was the alias for the poet Willem Eduard Keuning. He was born in the literary family Keuning in Spijk (provence of Groningen, northern part of the Netherlands).

For many years De Mérode worked as a teacher in the reformed primary school in the small town Uithuizermeeden. He was not only a profound religious man, he was also homosexual. Of course in that time it was impossible to talk about this in public, especially in the orthodox social environment in which he worked and lived.

Already at a young age De Mérode knew that he was gay, and this sexual orientation brought him a lifelong struggle with himself and his religion. He learned to accept his orientation, however, he was convinced that exertion of homosexuality was against Gods will. Despite his orthodox reformed creed, De Mérode was also quite interested in the mystics of the Roman Catholic religion. 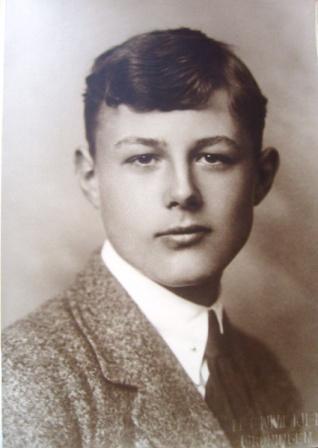 De Mérode had a special connection to some students at his school. His muse was Ekko Ubbens, a teenager in his class who really had no clue about what was going on in the mind of De Mérode. Willem de Mérode called him ‘Okke’ (his name backwards). Many of the poems he wrote express his desire of love and the impossibility of how he felt. How great his belief in God, he could not deny how he felt and he did not want to: he saw it as his cross, an orientation that he had to deal with .

The biograph of Hans Werkman shows clearly that De Mérode was a very intelligent and sensitive man. He felt lonely, but he withdrew himself intentionally from the social life in the small town he lived in. People saw him as a peculiar person. Nobody in Uithuizermeeden noticed that he wrote poets in his spare time. In addition, he did not want them to and he was statisfied with the situation. He sought out an alias to be able to stay anonymous.

He stayed in a small room in a hous of lodging-house keepster Van der Schaar, located in the Mainstreet of Uithuizermeeden (Hoofdstraat). He literally stuffed the room with books. Besides teaching, his daily pursuits were books, literature, history, theology, writing texts and poems. He had a passion for art, culture and music.

According to biographer Hans Werkman, the German poet August von Platen (1796-1835) was his role model in love:

Von Platen loved to talk about a blond, artistic young man in his poetry, with whom he could be in a lasting spiritual relationship. He wished to avert physical sexuality what he described as ‘longing’ and ‘eroticism’. The relationship had to be a doting self discipline, on terms of abstention.

In spite of this preference the desire was present, and it could not be pushed away. The year 1924 was the year of the great change-over for De Mérode. He spent eight months in prison in the city of Groningen because of a sexual contact with a former student of 16 years of age. When he was released, De Mérode was a broken man, in dismay. Ultimately he somehow converted this difficult time of his life into stunning poems and books of poems.

The following lines of poetry show how much he struggled with his sexual orientation, religion and his urge for reconciliation:

“Gods fury subsided purifyingly.
He waited, he saw and approves of me”.*

*Please take into account that I dit not study English; this translation is merely an attempt to catch the drift of the poems of De Mérode. If you should have any suggestions to improve a translation, please feel free to email me.

Although he had a bad health, Willem de Mérode visited the city of Venice twice, once in 1923 and once in 1936. His companion sometimes quite literally had to drag him from museum to museum. He absorbed the art, the beauty, the abundance. Also the story of ‘Death in Venice’ of Thomas Mann was appealing to him. It inspired him. In a letter to P.J. Meertens (of the Meertens Institute) he explained that ‘Death in Venice’ made him think of Okke.