This island can be spotted from the Fondamente Nuove (Cannaregio). A bit further is the isle of the glass blowers, Murano. I link Isola di San Michèle with De Mérodes poem ‘The prodigal son’. Now, what is the connection between the isle and this Biblical character? 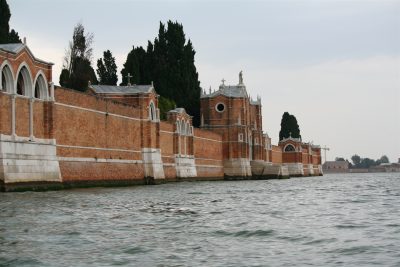 The isle is being used as a cemetary. Several famous persons are buried here, amongst them for example the composer Igor Stravinsky, author/poet Ezra Pound and Joseph Brodsky, juwel designer Jean Schlumberger, our own Dutch Tine Multatuli (the first wife of the author) and ballet-impresario Sergej Diaghilev ». And this person is the one I connect to De Mérodes poem. Diaghilev died in 1929 in Venetië, three months after the première of his piece ‘The prodigal son’. Subtile detail is that Diaghilev used music pieces for his ballet arrangements from Stravinksy who is also buried on the isle, quite next to him.

For his ‘The prodigal son’ he brought a variaty of people together, for example choregrapher Balanchine. The ballet piece brought international fame. It is after Apollon Musagète (from 1928) the oldest Balanchine-ballet still being performed worldwide. 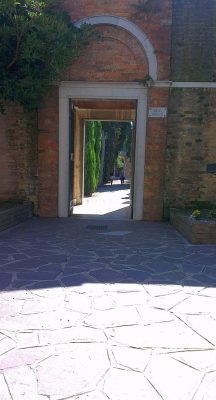 Cemetary Isola di San Michele is large and serene. If you seek quiteness after a visit to the city, the isle is a relief. Maybe it is not an obvious choice to visit a cemetary, however it is an extraordinary trip. You can hear birds, enjoy the beauty of the trees and admire the variaty of colours because of all the flowers that decorate the graves. The ballet shoes which are left behind on the grave of Diaghilev show respect and appreciation for his legacy.

At the beautiful island the first renaissance church of Venice was built. Impressive cypresses emphasise the beauty. The isle is overflowing with history of past centuries. It is still part of everyday life of the locals; there is a quite busy vaporetto-stop. Nowadays no foreigners may be buried there; only true Venetians are considered.

At first the isle was being used as a prison. However, Napoleon reassigned its purpose into a cemetary in 1805. At that time there were two isles, the other one was San Cristoforo »). Until then the deseized where buried in the city, but that gave problems with the quality of the drinking water from the wells at high water levels.

Willem de Mérode wrote a special poem about the story of the prodigal son in which coming home does not please him at all. Here a few lines from the poem (no translation). Click to read the complete version of the poem ».

From: Gestalten en stemmingen. Written in 1914.

YouTube-video of the isle 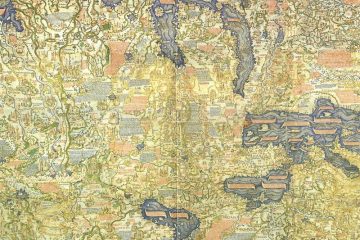 Laatste update op 18 November 2017Sorry, this entry is only available in Dutch. 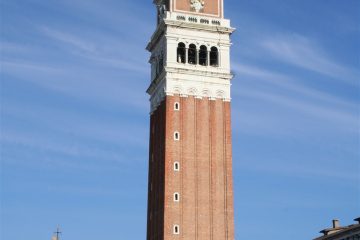 Laatste update op 8 May 202015 February 1564 Galileo Galilei was born in Pisa, Italy (1564-1642). You probably know the town from the tilted tower. According to the Dutch Observatory (Volkssterrenwacht) Galileo was a brilliant Read more… 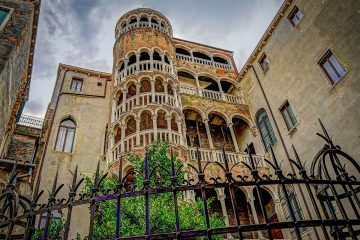 Laatste update op 8 May 2020Sorry, this entry is only available in Dutch.