The gigantic hands of Campanaro

In the 18th century there was a giant man in Venice: the Venetian Campanaro. He was over 2 meters tall and he was one of the last bell-ringers in the city. When Enrico Filippo Trois (1838-1918), the curator of the natural history museum in Venice (Museo di Storia Naturale), saw him, he immediately noticed his large hands. Trois came up with a somewhat lurid idea.

He thought that the skeleton of the giant would be a perfect asset for his museum. He told Campanaro:

“After your death, I’ll place your skeleton in a glass case and I’ll put a bell in your hand. Then you wil becom the guardian of our collection. .”

Trois and Campanaro agreed that Trois would receive the body if Trois paid his gambling debts. Another story said that Trois simply paid a good amount of money for the contract. Anyway, happy as could be, from that day on Campanaro treated himself to wine and beer in the local cafés, believing that his body would never be on display in the museum as Trois was way older and would probably die before Campanaro would However, Campanaro died even before he could spend all the money because of a heartattack and thus Trois could put the coveted skeleton with the large hands on display. It can still be seen in the museum today.

In the museum also embyro’s and bodyparts can be seen, in addition to the skeleton of Campanaro. Trois used his own balming technique which he never described on paper and so he took his secret to his grave.

It is being said that Campanaro leaves the museum, which is in the Fondaco dei Turchi, every night to ring the Marangona-bell in the Campanile at midnight. Then he goes to his old house somewhere around Campo Santi Giovanni e Paolo to ring the bell and he begs people for money so one day he can buy his own corpse back.

One can never be sure when Campanaro has gathered enough money to pay for the contract, so maybe one day his skeleton may have dissappeared mysteriously … 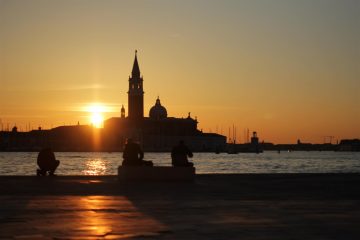 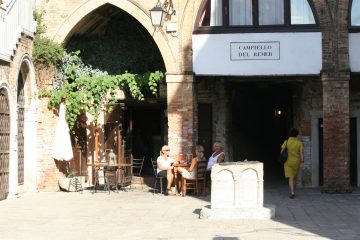 The story of the ghost of Fosco Loredan 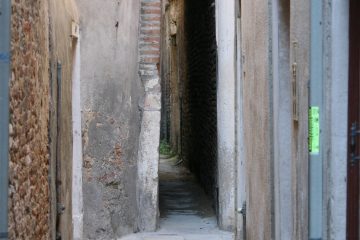 Laatste update op 18 November 2017In sestiere Cannaregio you can visit two interesting places that lie in eachother vicinity: een bas-relief at the wall on a corner and the narrowest street of Venice, Calle Varisco. Read more…